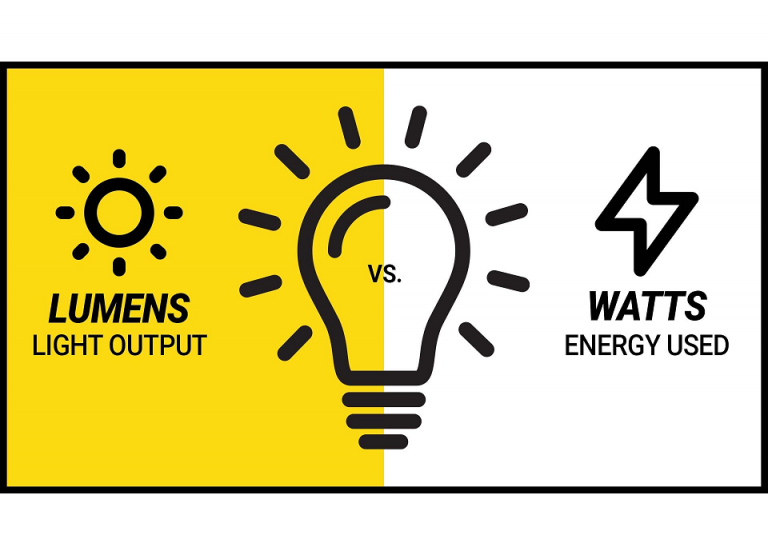 The total amount of light produced by a bulb is measured in lumens.

The number of Watts is the amount of electricity you must buy to produce those lumens.

Therefore, getting more lumens of light from each watt of electricity means you need to buy fewer watts.

In the old days of incandescent bulbs, you needed to buy 60 watts of electricity to get 900 lumens of light. This was called a 60w bulb.

Today, you only need to buy 9 watts of electricity to get the same 900 lumens of light from an LED bulb. We call this a “60w equivalent” bulb, because it produces the same amount of light you used to get from an old 60w incandescent bulb.

Why does improved efficiency matter?

If a 100 room hotel was to replace 4 x 60w incandescent bulbs per room with 4 x 9w LED bulbs per room, they would have the same amount of light, but reduce their power bill by almost $4,000 per year. (6 hour daily burn, 65% occupancy, 13.5 cent per KWH). The purchase price of these LED bulbs would be recovered in the first 4 months of use.

By using LED bulbs, our 100 room hotel example reduces its annual electrical consumption by almost 30,000 KWH. This means the utility company does not need to burn the 22,746 pounds of coal or 869 barbeque size tanks of propane that would have been burned to produce that electricity.

Not burning that coal or propane has the same effect on our environment as recycling 876 trash bags of waste instead of sending them to the landfill or planting 25 acres of forest every year.

Sign up for the newsletter to learn more about how Maris can become your inhouse lighting team!